The first time I saw Duke I thought, “I have to try it.” I always find unique Bourbons at Hi Time Wine Cellars in Costa Mesa, California. A couple years ago, I spotted Duke and bought a bottle. It seemed like a good week to try it. The Academy Awards were last week, and Duke was just sitting there on my bar cart waiting to be opened. 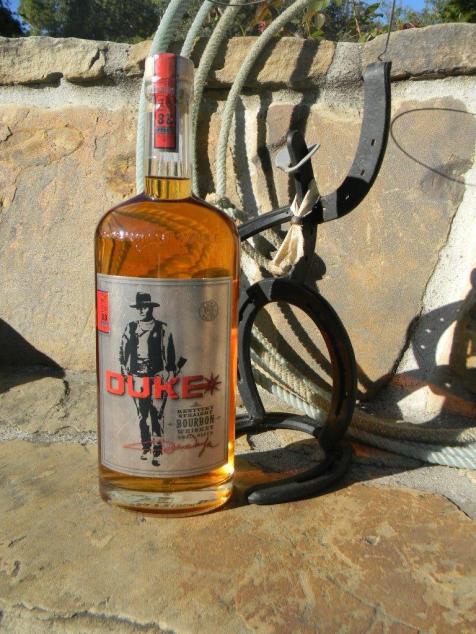 I love the oval bottle with The Duke on the label. The top edge of the bottle has “Monument Valley Distillers” molded into the bottle. It has a classic red label over the cork that says its 88 Proof. The red label ties into the red DUKE name printed on the label. And, of course, on the back of the label it says: A man’s gotta do what a man’s gotta do. -John Wayne 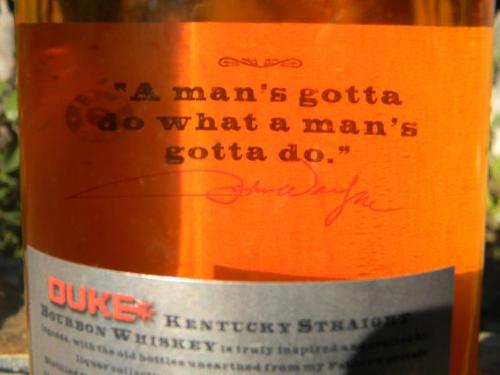 The Style of DUKE Bourbon was inspired by bottles from John Wayne’s personal whiskey collection, preserved for over 50 years and only recently discovered. Meticulously blended to reflect The Duke’s preferred whiskey flavor profile from tasting notes left behind during the time he was planning his own distillery. Distilled the old-fashioned way; hand crafted in small batches and aged in new hand built heavily charred American Oak barrels. A selection of 5 to 10 year old whiskeys are chosen barrel by barrel and blended by hand before the DUKE Bourbon reaches the bottle, and ultimately, you.

Now, how is Duke Kentucky Straight Bourbon Whiskey? It’s spicy and smooth but with a kick. Would you expect any less from The Duke? I was pleasantly surprised not knowing what to expect. Ethan Wayne, John Wayne’s son, created this spirit using the notes, writings and spirits that had been saved from his dad’s past. It was always John Wayne’s dream to create his own whiskey.

The nose is spicy but soft. I get a lot of vanilla when I smell it, and I get the caramel I seem to smell with all the bourbons I taste. I guess I just love caramel! The taste gives those same flavors with a hint of smoke. The finish is medium and soft on the palette.

I know when it first came out it was a little scarce but I am seeing it in more stores. I would suggest this is a bottle to have on your Bar Cart for the classic look, and ode to John Wayne.