Surprise! Lynn and I were in Barbados last week. We decided to go on a little island vacation this summer and had a great time. Naturally, while there, we had to taste some of the local spirits – rum! 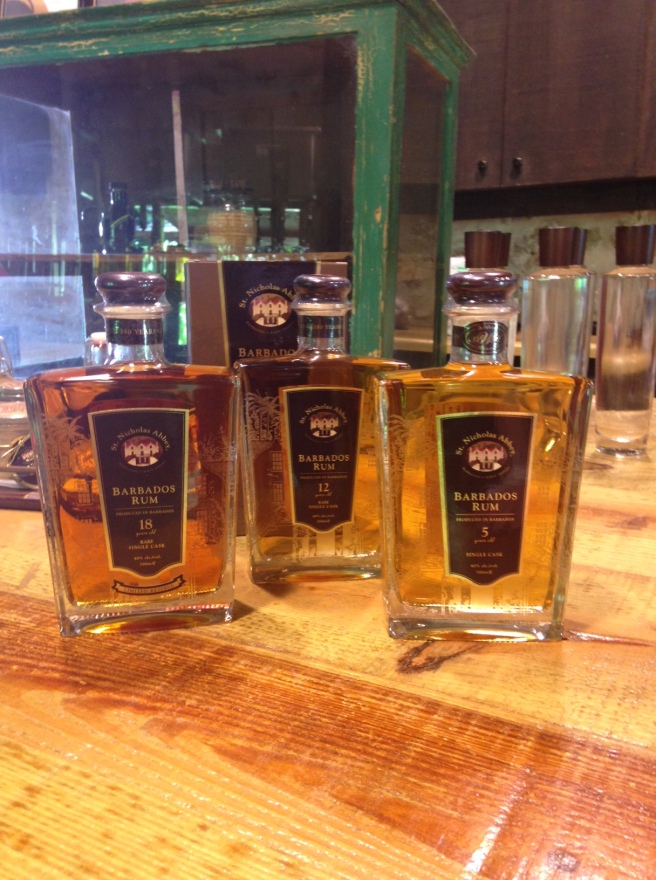 When in Barbados you must try the Rum. Barbados is famous for its sugarcane and when you are stuck with sugarcane and great limestone filtered water you make RUM. 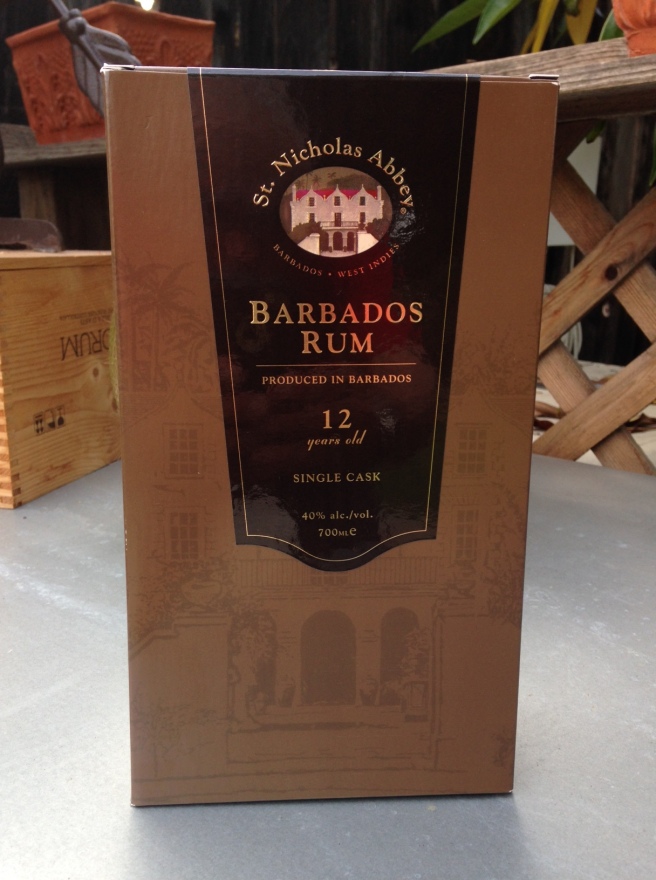 Our first stop was St. Nicholas Abbey. What an incredible find. Lynn had read about it and knew we would love it. One flat tire and driving on the left made a little rum welcome by the time we arrived. The home was built in 1658 by Colonel Benjamin Berringer, and it is one of the island’s oldest surviving plantations. The Jacobean style architecture is unusual for a Caribbean home and one of only 3 in the Western Hemisphere. The other 2 are Drax Hall also on Barbados, and Bacon’s Castle in Virginia. 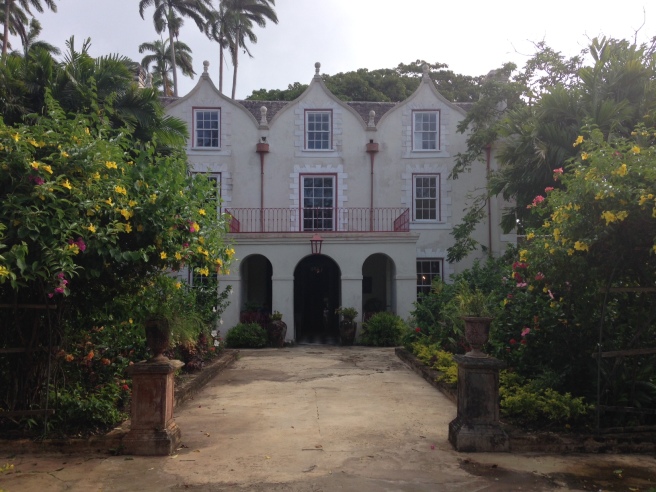 When you visit St. Nicholas Abbey you get a tour of the home, the boiling house, distillery, and gardens. Part of the tour includes a home movie shot in the c1935 by Charles Cave and gives a glimpse of life on the plantation and the island. The narration is also fun and so British. They serve a wonderful lunch on the terrace. Plan to spend a lot of time there tasting, eating, and touring. 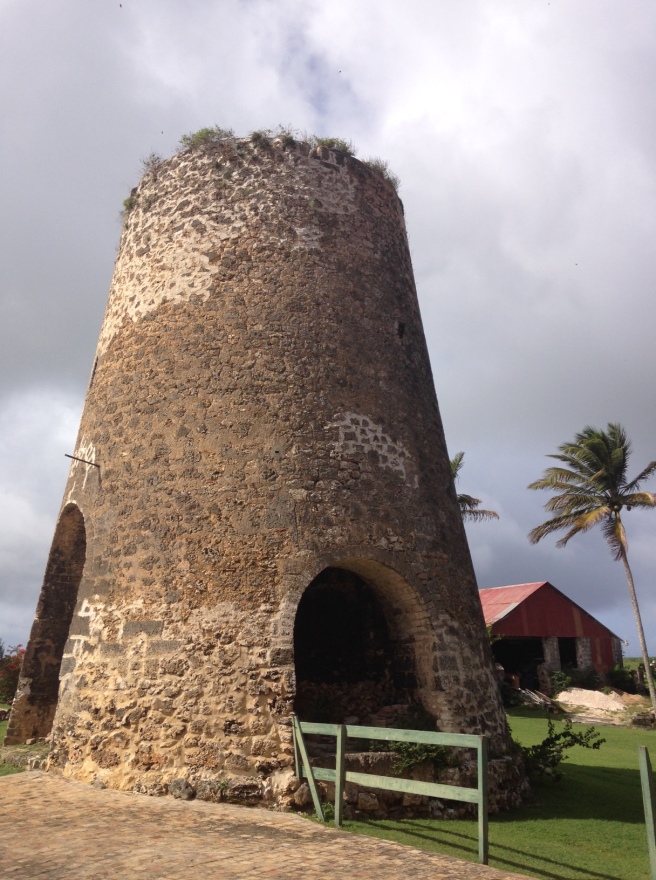 The current owners are Larry and Anna Warren who bought it in 2006. They bought the property to preserve it as part of the island’s heritage. They have meticulously restored the property with their sons Simon and Shae. It is their mission to develop St. Nicholas Abbey as a heritage attraction, cultural centre, and self supporting plantation. Part of that mission has brought them to develop St. Nicholas Abbey Rum. This will help to sustain the legacy of the plantation. They are also unique in that they use their own sugar cane to make this rum. They also sell brown sugar, molasses, and other homemade products. 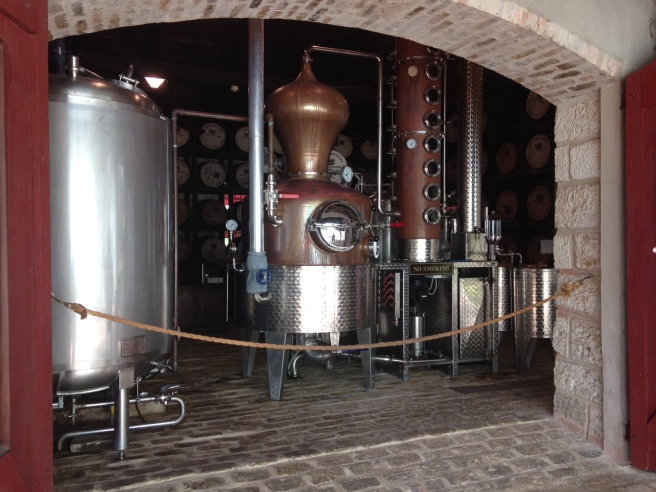 They are making their rum with classic Bajan balance and finesse. It is a great introduction to rum for Cognac, Whiskey, or Bourbon lovers. It has a mellow sweetness having been aged in bourbon barrels. It is a deep amber color with hints of vanilla, chocolate, cinnamon. Sound al little like your favorite Bourbon? As a review of the rum I can say I enjoyed it as much as any excellent bourbon. 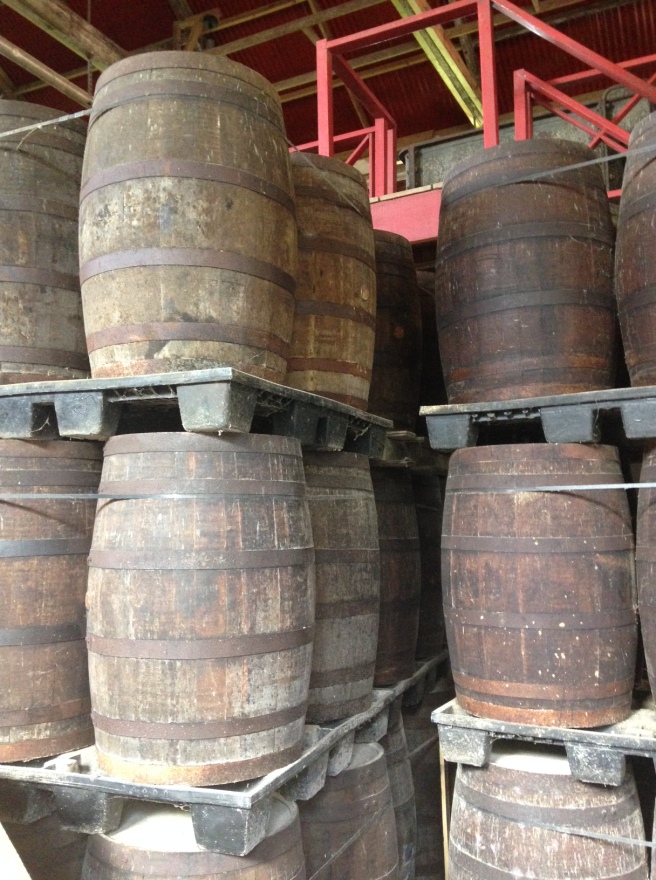 They sell their rum in 3 vintages. When we were there they offered a 5, 12, and 18 year old rum. What they sell on line through a few stores in the UK may have slightly different vintages. Most of their rum is sold right at the abbey. We spent some time with Anna in the bottling and packaging building. Another great old building they had restored. They have one lady who bottles, seals and labels every bottle. They hand bottle about 8,000 bottles a year. It was fascinating talking with Anna. You could sense her passion for the plantation and the rum. She and Larry along with their sons are doing something they love and putting that passion into every bottle. The bottle is a work of art. The bottle is etched with an image of the great house and sealed with a mahogany cork symbolic of the trees on the plantation. The top of the cork has a leather insert, hand stamped logo on the top. 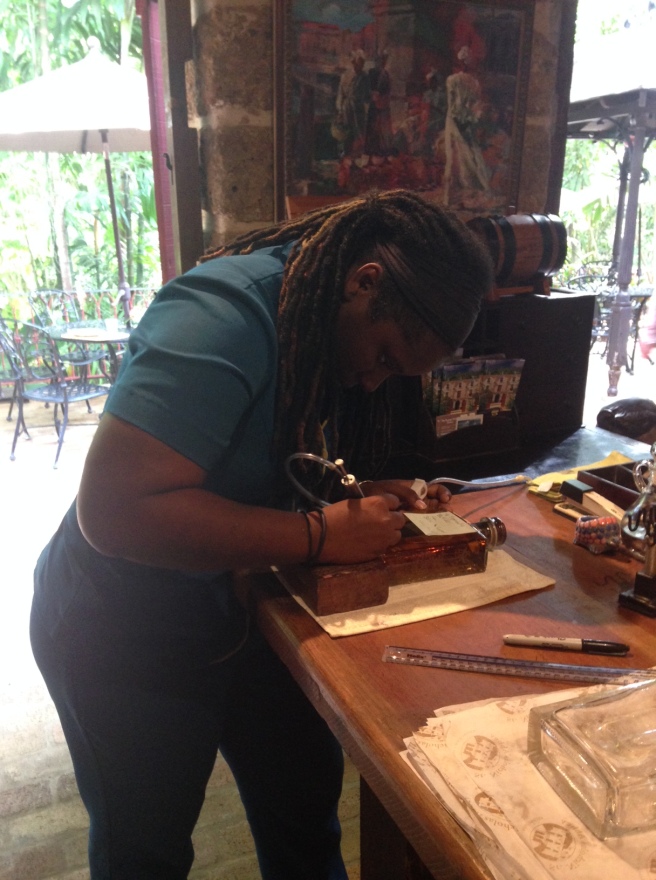 Everything has been done with style and class. Larry, a renowned architect, and Anna have shown incredible attention to detail.   From their product, to the tour, to the products they sell in their store it’s all first cabin. Even the tour guide’s uniforms reflect their passion to detail. When you go to Barbados you MUST tour St. Nicholas Abbey. You will be impressed with their rum and pleased you took the time to tour the Abbey and a rum distillery. 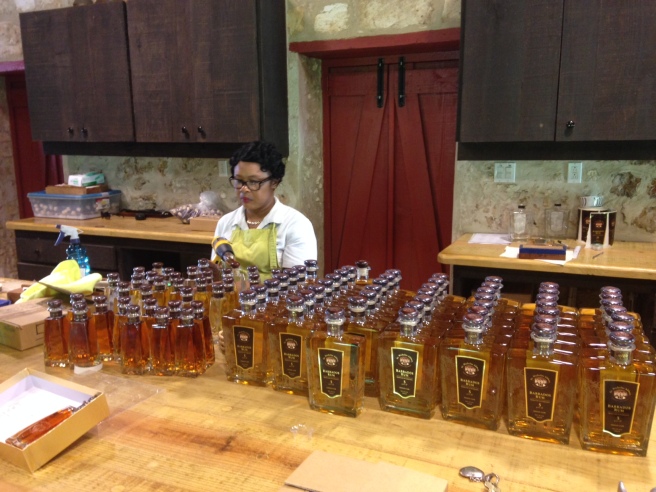 If you read my blog regularly you have probably already read about Whiskey Cake in Plano, TX. They have several hundred whiskies behind the bar. I was in Dallas last week (more specifically in Plano) on business. And once again I ended up at Whiskey Cake.

Lucky for me the chalkboard Happy Hour Cocktail Special was an Elijah Craig Old Fashioned for $5.00. I couldn’t resist and I wasn’t disappointed. They do a great job with their cocktails and its fun to just sit at the bar and watch their bartenders craft a lot of drinks. I love watching someone who enjoys their craft and is good at it. 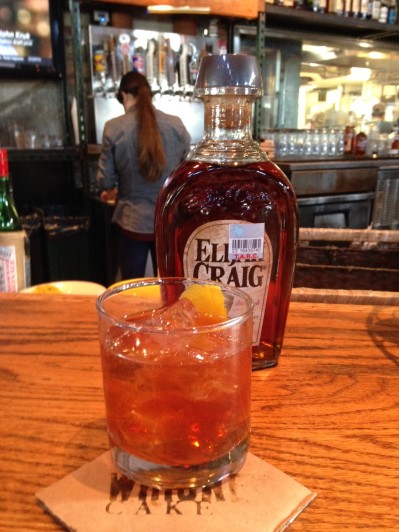 Well now for something off the menu I had not tried. The “OMG Burger” and it was amazing….! You can tell by the picture it’s a mouthful. The menu says they start with “onions, mushrooms, and goodness on a brisket burger, beer battered onion ring, roasted criminis, muenster, grain mustard, red chili mayo, lettuce, tomato, on put it on a challah bun.” 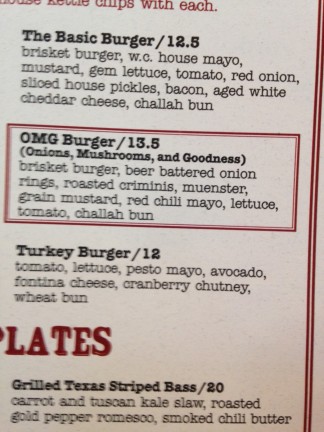 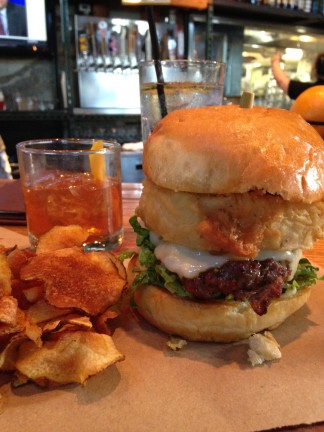 After the Old Fashioned, OMG Burger, and watching a lot of the Home Run Contest I decided it was time to finish off dinner with a Sazerac for my night cap. I had mine with Sazerac rye whiskey, simple, peychaud’s bitters, angostura bitters, absinthe rinse. A nice drink for $9.00. 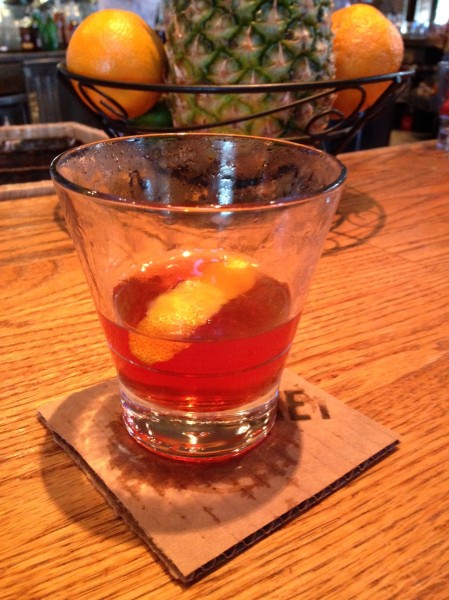 When in the Plano-area it is worth a trying Whiskey Cake. Great menu of appetizers, a lot of good sandwiches, main dishes, and salads.   But the main reason to go if you are a bourbon or rye drinker is their selection that you won’t find in many bars. They have been listed as one of the Top 50 Bourbon Bars in the USA.

They also do special dinners and the most recent was written on the Brown paper roll on the wall. A Whistle Pig pairing dinner. I can’t wait to go back and try something else on the menu! 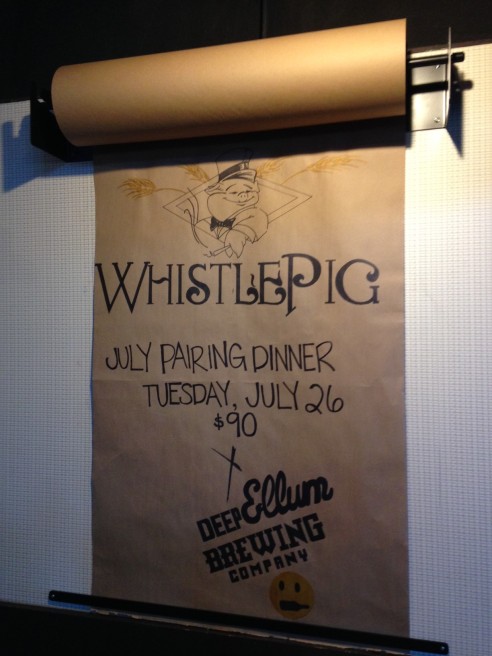 With all this bourbon talk around my blog, Lynn keeps looking for recipes that use bourbon. She found a fantastic recipe for “Savory Cheesy Thumbprint Cookies.” We were going to the Hollywood Bowl to see the LA Philharmonic and Chicago on July 3rd (Yes, that rock group we all listened to for years!). 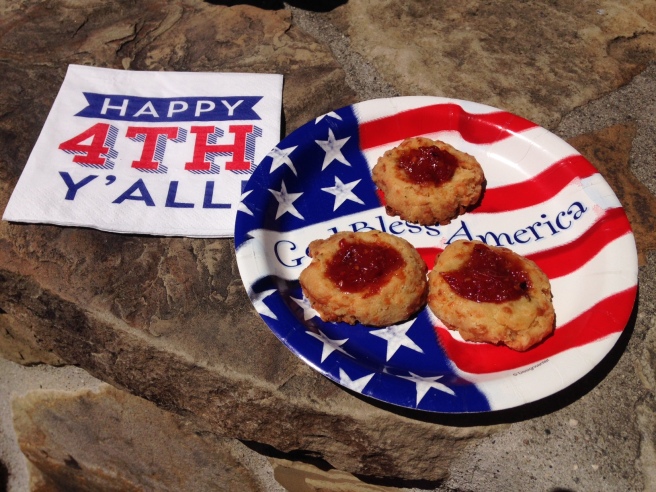 Lynn made these as a appetizer for our pre-concert picnic. WOW these are amazing. Lynn has made cheese pretzels for our annual Kentucky Derby Party for as long as i can remember. Well these have made the list for next year’s party (is it time to retire cheese pretzels??), and just about any time we need a quick, easy, delicious appetizer.

When you first bite into them you taste the sweetness of the tomato jam kicked up with just enough spice from the bourbon. The cheese cookies are crispy with a subtle corn flavor that adds to the surprise as to how delicious, savory and perfect for any party.

The recipe is from The Flavor Bender. They have a fun website with the tagline, Flavor Bender “Because it’s OK to play with your food.”

These Cookies are perfect for a picnic or a formal party. We tried them with bourbon (of course), wine, and champagne. They work with all of them and hold them in under intense scrutiny. There were 85 at the picnic we attended and everyone was raving about them.