A few weeks ago I wrote about the Whiskey Barons collection, a special release by Campari America, and reviewed Old Ripy. Today I’m giving you the lowdown on Bond & Lillard, also released in the collection.

Bond & Lillard was a trusted name in pre-prohibition whiskey industry. It was first distilled by John Bond, a veteran of the revolutionary war. He left the company to his son and grandson, David and William. David would go on to form a partnership with his brother-in-law C.C. Lillard in 1869, and they began labeling the product Bond & Lillard. The bourbon was so revered it won the grand prize at the 1904 St. Louis World’s Fair. Using the tasting notes the judges wrote down at the World’s Fair and historic notes, Wild Turkey created today’s bourbon.

This is another 375ml offering in a unique round bottle. Again, classic graphics with the look of an old label. The label has statements on it such as, “It Bears no Equal” and “Real Delicacy of Flavor.” The top of the bottle says, “Judgment & Integrity.” As I have said many times in the past, I love good packaging. They have done a nice job on this Bond & Lillard bottles shape and graphics. 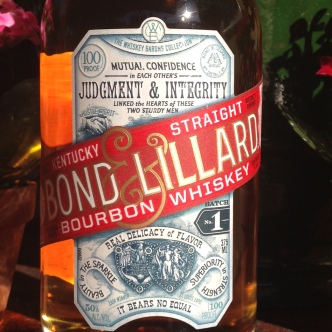 The bourbon is a golden color, about the same color as Old Ripy. I would have thought it would be lighter being a younger bourbon. It has a fruity, spice and vanilla nose to it. It also has a fruity and spice taste. For a higher proof whiskey this one does not have the sting or bite you would expect. It has a pleasant finish and leaves fruit on the tongue with a hint of spice.

I like having a diverse and deep bench on my bar cart. This is a bourbon I have added to it and suggest you do the same. Bond & Lillard has an impressive look and equally impressive taste. At $49.95 it is an affordable, out of the ordinary, bourbon to have when you want to get off the beaten path of the Bourbon Trail bourbons. Try a bottle and send me your thoughts.

This post was sponsored by Campari America, who was generous to send me a bottle to try! Opinions are my own.