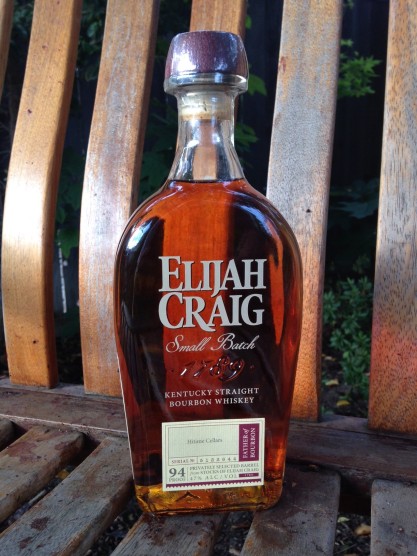 Elijah Craig is named for a Baptist minister who was originally credited with inventing bourbon in the late 1700’s. Don’t know about you but there wasn’t a lot of drinking in the Baptist Church where I grew up.

On my last trip to Hi-Time Wine Cellars in Costa Mesa I asked Ryan what he had gotten in recently that I should try. He never steers me wrong and he pointed me toward a couple of bottles they had recently received. When he showed me the Elijah Craig Small Batch, that they had hand picked when in Kentucky, I was immediately intrigued.

This latest Elijah Craig Single Batch was just released by Heaven Hill, which established the brand in 1986. There is no age statement on the bottle but according to the information given to Hi-Times Wine Cellars this is a 9-year-old bourbon. In 2016 Heaven Hill announced they were no longer going to put age statements on their bottles. With supply and demand you are seeing more and more of that in the industry.

The bottom line, does it matter? The real proof is in the pudding (who said that?). Or in this case the real proof is on the bottle and the taste inside is what matters. It has a very strong nose the minute you open it. The spices, vanilla, and sugars jump out at you.

That was not my immediate first impression. I tasted this one on three the separate evenings to write this review. The first night I opened it I had been drinking a high proof bourbon first and this one seemed a little weak. I decided that it was not a fair assessment and wanted to give it a second chance. We learned from our friends Ray and Jeannine ,who own Highland Valley Vineyards, how important atmosphere, music, and mood are to taste. More on that in a later blog but explains why when you try a wine on a tour, buy a case, take it home, and then say, “What was I thinking when I bought this?”

Back to the Bourbon. Elijah Craig has been putting out some very nice bourbons the last few years and this one qualifies as another winner. It has very strong appeal when you open. More of the spices and not so much alcohol. As you taste it you will note it has a very soft appeal and then the spices and a bit of alcohol run into the palate. I have to say it has the body of a more expensive bourbon. Others have described it as weak but after tasting it for the third time last night I think it is perfect for my palate neat.

It is at a price point to be served neat or mixed in a cocktail – you can’t go wrong. With the bourbon inside this attractive bottle with its wood stopper is the perfect gift for a friend. This will be on their bar long after that that $20 bottle of wine.